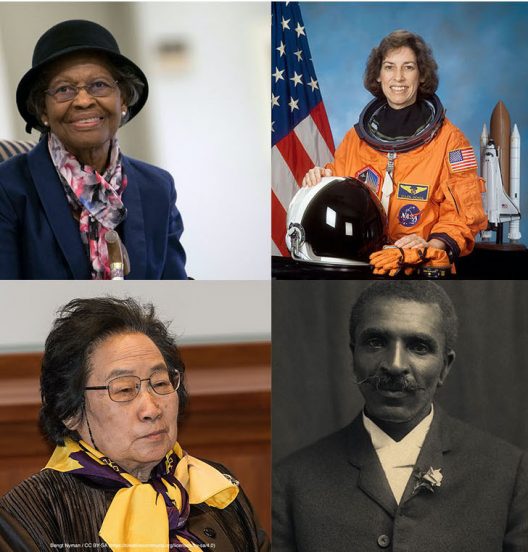 There are so many achievements in science, and so many inspirational scientists, but it is all too easy to consider only the most famous. In her blog, Valerie Cox shares information on a group of scientists that she feels should be brought to children’s attention. Consider this list as a starting point and encourage children to delve more deeply into others too.

Tu Youyou is an incredible science explorer because she was the first person from the People’s Republic of China to win the Nobel Peace Prize in Physiology or Medicine. After contracting tuberculosis as a teen, she knew that she wanted to study medicine. After using herself as a test subject, her research, based on ancient Chinese texts, proved that artemisinin is a natural component that is effective at treating malaria. Her work has saved the lives of thousands across the world, and she performed her life-saving research without ever receiving a medical degree or doctorate.

566 people have had the opportunity to travel into space, and cosmonaut Yuri Gagarin was the very first one. As a member of the Russian Air Force and graduate of the Soviet Air Force Academy, Gagarin became the first person to fly in space on April 12, 1961. Flying in Vostok 1, Gagarin was not controlling the spacecraft but had a key if he needed to unlock the controls during an emergency. Gagarin’s first space flight lasted 108 minutes, and he died in a plane crash while he was training for his second space flight. Space exploration has brought us many great explorers, but as the first person in space, Yuri Gagarin will always have a special place.

Also a member of the small group who has traveled into space, Ellen Ochoa became the first Hispanic female to travel in space when she flew on a 9 day mission on the Discovery in 1993. Logging over 1,000 hours in space, Ochoa flew on 3 other space flights, and after her time as an astronaut, she has severed in different leadership positions of space organizations. When she became the director of the Johnson Space Center, she was the first Hispanic director and its second female director.

Born into slavery, George Washington Carver had many ground-breaking discoveries that revolutionized the agriculture industry. His work is typically associated with peanuts because he found over 100 uses for it including food, dyes, and even gasoline. He was the first African American student at Iowa State, and after his graduation, he became a professor and researcher at Tuskegee University. Without his perseverance and research, the agriculture industry wouldn’t know about the importance of crop rotation and variation. Not only did Carver work to help the agriculture industry through his research, but he created a traveling classroom using a wagon so he could educate farmers.

Approximately 70% of the earth’s surface is water, and oceanographers play an important part in helping us learn more about the ocean’s geography, creatures, and vegetation. Just like space exploration, oceanography, the study of the ocean, has given us countless science explorers. Marie Tharp made significant strides in ocean discovery by giving us the first scientific map of the Atlantic Ocean’s floor. Before her work, many believed the ocean floor to be flat, but Tharp was able to prove the vast differences in the sea floor including mountains and trenches. Due to her scientific discoveries, people realized that tectonic plates work on the seafloors too, and considering women were not allowed on research vessels during the early parts of her career, her scientific discoveries were truly groundbreaking.

Countless individuals have made significant discoveries in the medical field, and American surgeon Charles Drew was one of them. He made significant advances in blood plasma research and created the first blood bank. By advocating the need for blood donation and blood banks, his research saved countless lives and continues to save lives daily. Due to his blood storage research and work with the Red Cross, blood banks were first heavily used during World War II and saved the lives of Allied troops.

Without the work of Gladys West, we wouldn’t be able to use or phones for simple functions like tagging a picture’s location or looking up directions. After graduating first in her high school class in order to receive a college scholarship, she studied math classes even though there were few other females in her classes. Working at the Naval Surface Warfare Center, she analyzed satellite data to determine precise locations, and she worked with computer programmers to help develop computer programs that would later become GPS. Even after retiring and suffering a stroke, West went on to receive her Ph.D. proving that you’re never too old to achieve your goals.

Countless individuals have made significant discoveries in the science field, and they are all science explorers in their own respective fields. Many of these science explorers overcame large obstacles to obtain their education and training, and it’s important to take time to learn about all of their many accomplishments.

Blog author, Valerie Cox, is a contributing writer for LOC Scientific.
In her spare time, Valerie enjoys reading, spending time with her family, and volunteering in her local community.

Wow Science also thinks you may also like to consider:

Encouraging your children to see themselves as scientists. Try Kid’s Invent Stuff where 4-11 year olds can submit their ideas for inventions and have the chance to get their ideas built by real engineers.
PSTT‘s Standing on the Shoulders of Giants resource links the work of 10 famous historic scientists to the work of contemporary scientists, giving children an appreciation of how wider scientific understanding develops over time.

Science in the real world