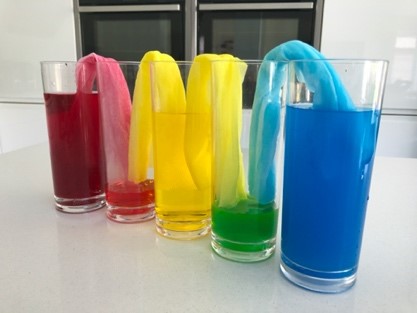 Often used a symbol of peace and hope, rainbows are appearing across the country. You may have spotted them in local windows as you take your daily walk. But why?

PSTT Regional Mentor Kate Redhead considers ways you can engage children in science activities as they display rainbows of support in windows. 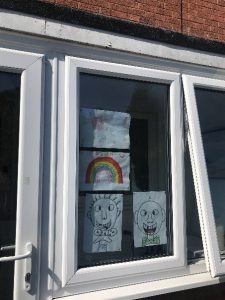 During these strange times that we are all experiencing of social distancing and staying at home, children are creating colourful rainbows to both give cheer to those who see them and to thank key workers for their hard work.  Some children have moved to creating rainbow patterns in chalk on walls, paths and driveways outside their homes.  As well giving a creative outlet during home-schooling, many parents are also tasking children with spotting rainbows while out on their daily walk, sparking the Twitter hashtag #ChaseTheRainbow.

Why not try out some new rainbow activities? Here are two that both rely on capillary action:

How to set up the activity:

Cut the kitchen roll into a rainbow shape; colour the bottom edges of th 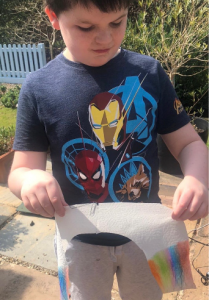 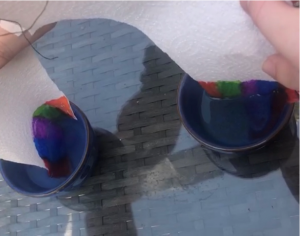 Taking it further: how long does it take your rainbow to grow? Does it grow at the same rate with other liquids? What happens if you use different colours on each side? 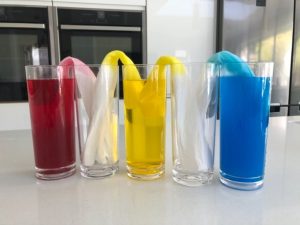 How to set up the activity: Place the beakers in a row; fill the middle beaker with water to its brim and add yellow food colouring; do the same with the two beakers at each end, this time using blue colouring in one beaker and red in the other. Roll/twist each piece of paper towel to make 4 sausage shapes; link each beaker to the next using these paper towels (see photo). Observe changes over the next hour or so.  What happens and why? 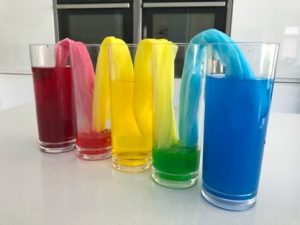 Taking it further: what happens if the room is warmer/colder? Do different colours produce the same result?  Do different liquids travel at the same rate?

With an additional beaker and 2 more sheets of paper towel, you could also try linking the fluids from the end beakers together. What colour might you expect to see produced in the extra beaker?

For those ready to understand more about the science:

Pigments in the inks and foo­­­d colouring are carried up through the paper towels by a process called capillary action. Molecules (small particles) in a liquid are attracted to each other – we say there is cohesion between them.

Water molecules are strongly cohesive. When molecules in one material are attracted to those in another, different material, we say there is adhesion. Capillary action occurs when adhesive forces are stronger than cohesive forces and this causes a liquid to travel through another material. You see water rising up against gravity due to this force.

Paper is made of tiny, interwoven wood fibres to which water molecules readily adhere and this results in capillary action of the water through the paper.

If you enjoyed these two activities and would like to try more, check out @MrsPassSci for a ‘Find Colours in Nature’ idea and @RedPSTT for ‘Rainbow Rose’.  Ideas of your own?  Share them on Twitter with @WOWScience and @PSTT_whyhow

You could also try out this Rainbow Mechanic game. Use mirrors to reflect light through a maze and onto a prism!