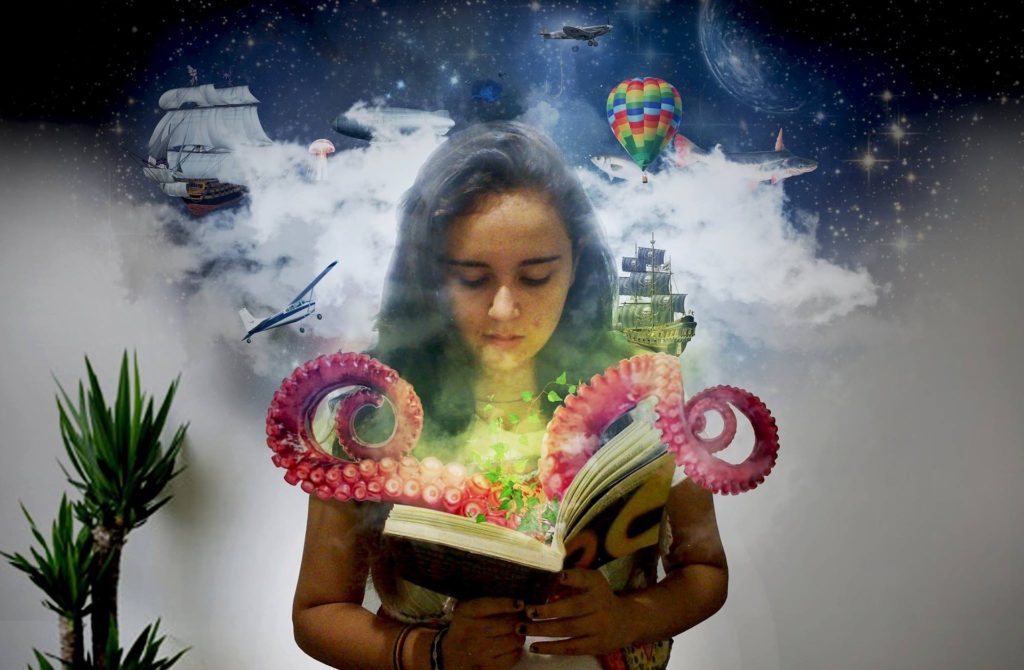 Psychologists recognise that the story format gets a different kind of attention in our brain – it is ‘psychologically privileged’. Our minds tend to look for cause and effect and even if the information is not presented as cause and effect, we tend to remember things in this way, in this order. Other important factors that our brains listen out for are conflict and characters and complications: we wonder with whom should we empathise in the story and how do they cope with difficult events? So, how can we use this in the classroom?

History is an obvious candidate for teaching through stories as the content is largely cause and effect and there is often an emotional content to a historical story too, which engages the reader/listener. But what about science? How can we engage that story-processing brain when learning about science?

Mary Anning is the classic example. A poor girl, who survived a lightning strike as a child, has to scrape a living selling curiosities found on the beach in Lyme Regis. One day she comes across an enormous fossilised ichthyosaur and she manages to excavate it and sells it for a large sum of money. She becomes a recognised name in palaeontology, although she is never given credit in her lifetime, as she is a woman.

It is not the science in the story of Mary Anning story that grips us. The important factor is that she was poor and likely to starve but she managed to work her way up from from rags to riches, using what she knew. The story stands alone without the science. There is emotional content: a character who needed to overcome complicated and difficult circumstances in order to survive and be happy. The science is the setting. The science is a helper. But the story itself stands alone as a good story. The science is not the star. Our brains engage best with stories where the people or the characters are the stars.

During the processes of listening to the story, the children will have imagined digging up that fossil and learn that the fossil was made of rock that, long ago, was the skeleton of an ancient animal. They will hear how this creature is extinct and that it was only discovered because the layers of rock had moved and eroded away.

The science would be there in the telling, there to visualise and retain as the story is memorised. But the science is not the star.

So, what does a good story for science look like? Firstly, it needs to be the kind of story your children pick off the shelf and ask you to read (because they like to ride the rollercoaster of emotions too). Secondly, it should have some practical applications of science in it, which can be investigated to help the children understand the story further.

A good key stage 2 example would be ‘The Northern Lights’ by Philip Pullman. Lyra’s friend Billy Costa goes missing. It appears that he has been stolen by the GOBblers but it is not clear why this organisation is taking children and hiding them away in the north. Lyra is determined to find out more so she can travel to the north and rescue Billy. This is a gripping story where we care about Lyra and she cares about Billy. We feel her pain and her frustration and we, as readers, put our hope in Lyra as she journeys north.

The story stands alone: it is a good story. However, on this journey she travels by zeppelin, by boat, by sledge, by hot air balloon, by polar bear and on foot through snow and ice and treacherous conditions.  All of those modes of transport involve forces. Each leg of the journey encounters difficulties, which can be better understood if the science is investigated – if the forces are felt.

Ideally, I would recommend lining up your science lessons to follow the plot line of the story you are reading, stopping to investigate as you go. Sometimes, as teachers, we find it hard to read a whole novel to the class. It takes a long time and often the majority of our time is directed.

I would encourage you to read as much as you can and fill in the gaps with storytelling, which is much quicker. The children will miss out on the carefully chosen language of the writer but at least there will be a sense of plot progression and the engagement with the characters can be maintained.

The Children of the Water God

Another approach is to story tell the whole story in one go and then revisit aspects of the story as you progress through the science topic. I have written and collected some stories for science teaching which are designed to be told by the teacher and then the children (Science Through Stories, Smith and Pottle, Hawthorn, 2015). They are short stories which the children can learn themselves, using the Storytelling Schools method.

The added benefit of the children learning to tell the story is that in telling the story, they are also telling the science. A story we have learned to tell is not quickly forgotten. In my experience, the children will remember the story and the characters first, even after a few years, and then recall the science. It comes back even quicker if there is a song attached to the story.

An example of a story like this is ‘The Children of the Water God’. It is set at the dawn of time. All the water is in one place and the water god owns it all. When people arrive on the Earth he is not generous with the water and the people begin to die of thirst. When they steal his water, the water god sends his children Eva and Con to guard it. The people persuade warm-hearted Eva to help and she finds a way to sneak the water past her father. When her father finds out he is furious but Eva shows him that all the water comes back to him in the end and his mind is changed. She even sings a song about it!

The children learn the story as they would learn a Greek myth. It is only when we make a model water cycle and start talking about evaporation and condensation that the children recognise Eva’s game from the story and realise it is the same as the processes in the water cycle. Again, the story stands alone: it is a good story. The science is the helper but it is not the star.

So, when you choose a story for science – pick a good one. If you wouldn’t pick a book off the shelf for story time, don’t pick it for science.

You could use the story of the scientist (if it is a good story) or you could choose a great novel or picture book that has something within it that you can investigate.

Pick one with plenty of things to investigate all relating to one topic if you can, though I know they are hard to find.

If you want to really get the children to retain the story, teach them to tell the story themselves. Remember, if the story doesn’t grip you, it won’t grip the children so choose the books that you love.

If you’d like to hear the water god story, and song, you can find them on our Storytelling Schools YouTube channel or read in our book ‘Science Through Stories’ (Smith and Pottle, Hawthorn, 2015).

If you’d like to know more about teaching children to tell stories, using their own words rather than a prepared script, check out www.storytellingschools.com.And if you want to know more about using well-loved novels and picture books at the centre of your science teaching, check out my new books due out at the end of May: